Catch up with the ETIM-UK Q1 Update, issued January 2019 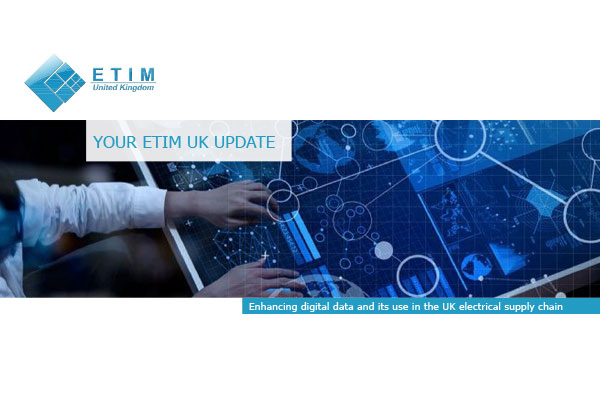 Our first newsletter of 2019 brings you up-to-date with all the ETIM news. As we transition between Phases 2 and 3 or our journey, our round-up looks back of the past year and sets out the short-term and long-term plans. 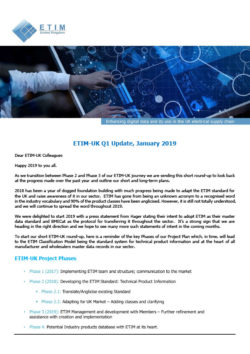 As we transition between Phase 2 and Phase 3 of our ETIM-UK journey we are sending this short round-up to look back at the progress made over the past year and outline our short and long-term plans.

2018 has been a year of dogged foundation building with much progress being made to adapt the ETIM standard for the UK and raise awareness of it in our sector. ETIM has gone from being an unknown acronym to a recognised word in the industry vocabulary and 90% of the product classes have been anglicised. However, it is still not totally understood, and we will continue to spread the word throughout 2019.

We were delighted to start 2019 with a press statement from Hager stating their intent to adopt ETIM as their master data standard and BMECat as the protocol for transferring it throughout the sector. It’s a strong sign that we are heading in the right direction and we hope to see many more such statements of intent in the coming months

To start our short ETIM-UK round-up, here is a reminder of the key Phases of our Project Plan which, in time, will lead to the ETIM Classification Model being the standard system for technical product information and at the heart of all manufacturer and wholesalers master data records in our sector.

Phase 1 (2017): Implementing ETIM team and structure; communication to the market

Phase 3 (2019): ETIM Management and development with Members – Further refinement and assistance with creation and implementation

Phase 4: Potential Industry products database with ETIM at its heart.

Almost 50 Working Group Meetings took place last year with over 70 representatives from 50 companies. These were mostly manufacturers, but we also welcomed some wholesalers who have already implemented ETIM in their businesses or are about to do so.

The table below summarises the ETIM product groups that have been tackled and anglicised and subsequently communicated to ETIM International for integration into the model for use. 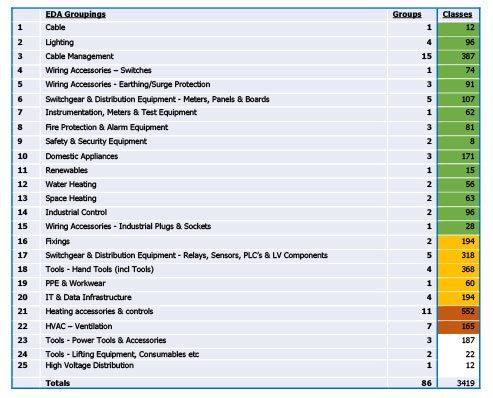 Some points to note about the Anglicisation Process:

In the course of this work it emerged that some important product ranges are unique to the UK, these include steel trunking and pre-assembled consumer units. The EDA is  organising working groups to create these ETIM Classes from scratch.

A final important point to note about the ETIM standard:

David Lorrison is the person to contact for all proposed UK amendments.

In addition to the translation and anglicisation work, ETIM-UK continues to provide one-to-one ETIM support across our membership, including our free ETIM-ready audit. This examines your ETIM readiness and gives you advice and information to help you get your product master data in good order. Contact David Lorrison on 07476 733440 for more information.

Over 40 ETIM-ready audits have taken place so far and one of the principal findings is that manufacturers and wholesalers need to create a data strategy and often to invest in a Product Information Management System (PIM). A frequently asked question from manufacturers and wholesalers is how best to collect and store technical product data, and how ‘non-technical’ product information such as images and video can be integrated. The answer is a PIM system.

To help our members and affiliates find a PIM system that’s simple to install, simple to manage, good value for money, and compatible with ETIM classified data, the EDA has worked closely with provider ProPlanet and its cloud-based solutions.

In October and November, ProPlanet experts Moniek Boelhouwer and Maurice Walravens (below) flew into the UK from their Netherlands HQ to chair two lively and interactive briefing sessions for EDA wholesalers and manufacturers. 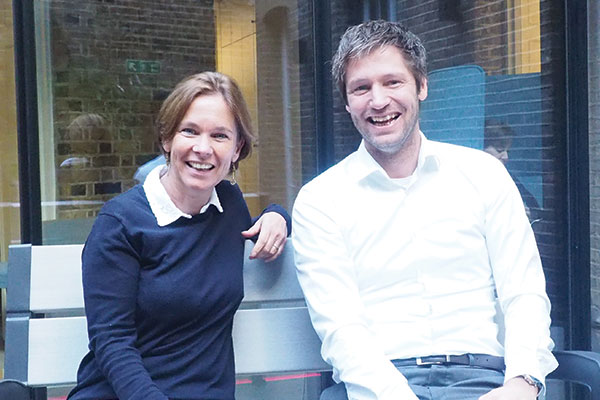 Communication is key – Connecting with the wider industry

A key priority for the EDA throughout this project has been to ensure that the industry is on board. All parties in the electro-technical supply chain must be aware of ETIM-UK’s plans and progress, understand ETIM and its impact and benefit for the industry, and have a say in its development and implementation. To this end, the ETIM Advisory Group, comprising representatives from manufacturers, wholesalers and trade associations including BCA, BEAMA, BESA, LIA, the ECA and SELECT, was formed in late 2017.

The Advisory Board met twice in 2018 and its next meeting is planned for March 2019.

The Advisory Group members also play an Ambassadorial role by ensuring that their organisations are kept up to date with ETIM-UK developments. In 2019, the Wholesaler Buying Group Heads will join the Group.

Other communication vehicles include:

We urge you to follow ETIM-UK on LinkedIn and to visit the ETIM-UK website which contains many useful technical resources and information about ETIM.

There is a view that ETIM is separate from, and competes with, the drive to create data for BIM. ETIM-UK is keen to dispel this misconception. ETIM provides information which should in turn link with the product data standards currently being developed for BIM and indeed many other data pools. ETIM International has already developed an advanced version of ETIM called ETIM-MC (ETIM modelling class) and David Lorrison is currently assessing how this complements BIM work being done by manufacturers.

ETIM-UK also reached out to link with other groups working in the UK digitally built environment:

When the EDA joined ETIM International in 2017, it was the 15th country to join the growing community which included most continental European countries, the USA and Canada. Since then 5 countries have joined and, in early January 2019, we received the news that Portugal and Slovenia were the latest to sign up bring the total number of countries to 20.

David Lorrison represents ETIM-UK on the ETIM International Technical Committee which meets twice every year and governs the development of the Standard. Key developments in 2018 have added value to the classification, and will be introduced in the UK during 2019:

Management of the ETIM Standard

Development of an industry database with ETIM at its heart

In its December 2018 meeting, the EDA Management Board gave the green light to carry out a proof of concept (PoC) project during which we will develop a prototype database. This will be similar to databases which are operating successfully in several other countries which have adopted the ETIM standard.

An independent industry expert has been commissioned to carry out this preliminary six-month project and a contract has been signed with ProPlanet as our technology partner.

In early February 2019, we will be contacting a sample of wholesalers and manufacturers to take part in the PoC and also speaking to our trade association contacts to ensure they are informed of our plans.

You can expect to see a lot of communication from us over the next few weeks and months and of course we would welcome your feedback and comments.

If you have any comments or questions about this, please do not hesitate to contact me.